The Power to Start Things 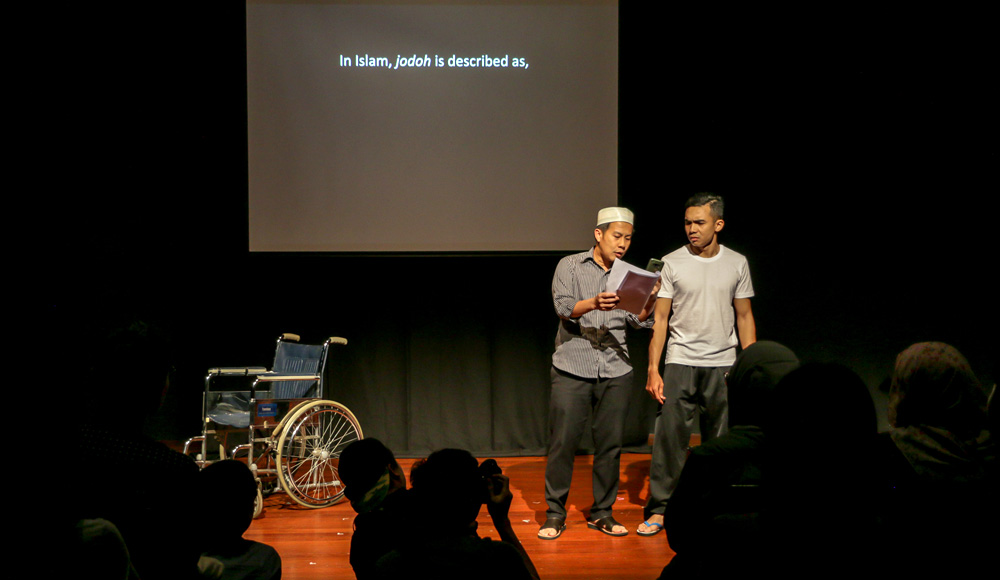 A scene from ETA: 9MIN by Main Tulis Group, performed at Late-Night Texting 2018.

A scene from ETA: 9MIN by Main Tulis Group, performed at Late-Night Texting 2018.

Playwriting can be a lonely career. For the independent playwright, creating work and searching for opportunities by oneself is often a daunting, difficult task. But two heads (or more) are better than one, as I found out from two playwriting collectives who have made Centre 42 their home base.

“I feel like when you’re younger, the terrain seems very wild and impenetrable,” Nabilah Said tells me. Nabilah is a freelance playwright with four performed works under her belt in the past six months. She’s also just two months into her new role as the editor of online arts publication ArtsEquator.com.

“You’re one person in an industry that already has its structures, companies and festivals. You can apply to be part of things and you can contact people in the industry to work with them. But if you don’t get the opportunity, it’s easy to be shut out. For me, I thought we could start our own thing.” 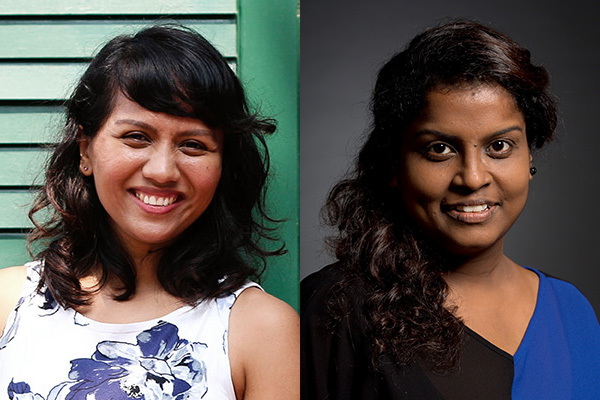 That “thing” was Main Tulis Group (MTG), a playwriting collective of nine playwrights, including Nabilah, who write in Malay and English. Nabilah started MTG in 2016 after attending a playwriting course conducted by veteran playwright Huzir Sulaiman that year. The course group met every week to share new writing. They’d give feedback on each other’s work and spur each other on to develop a full-length draft.

Nabilah liked the course because it gave her a support system: “It helped me be accountable for my writing, kind of like exercise groups that work out together. You can’t skip if you feel lazy.”

Immediately after the course ended, Nabilah gathered eight other Malay writer-friends. The collective, christened Main Tulis, or “play write” in Malay, began meeting at Centre 42 once a month. Nabilah says, “It was like tuition for playwrights. The objective was very simple – let’s come together, eat and read our plays.” 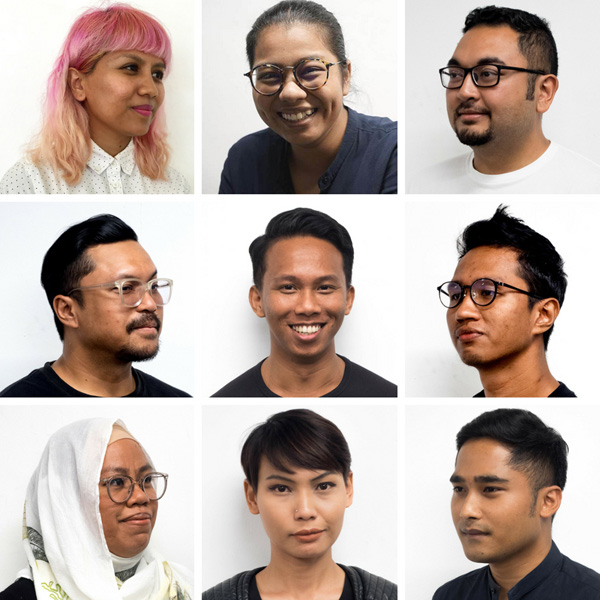 Three years on, another playwriting collective began meeting regularly at Centre 42. This was Brown Voices, a collective of, at present, 14 Indian theatre-makers and writers. Its founder is freelance Indian actor-director-playwright Grace Kalaiselvi, who’s been involved in at least four creative projects in the past month. She shares with me her grand ambition for starting Brown Voices – to have more Indian representation in Singapore English-language theatre.

Grace is very much a self-starter. When she graduated from the Intercultural Theatre Institute in 2014, she experienced a long dry spell for stage work because there were few roles for Indian actors. Her solution? She created her own role – Grace co-created Mother I : Amma Naan : Ibu Aku with actor Suhaili Safari in 2016, which a reviewer called “a nuanced tribute to motherhood”. She invited all the major theatre companies to the English-Malay-Tamil production, which helped her break into Singapore theatre.

Despite experiencing these challenges as an Indian theatre practitioner, Grace is remarkably sympathetic towards the Singapore theatre industry. She’d interviewed several local playwrights for a 2017 Vault presentation on Indian representation in Singapore English-language plays. “The playwrights say they don’t know what or how to write about Indian culture, which is perfectly understandable. I can’t expect them to do it,” she explains. “So how else can [Indian culture] be represented if we don’t write it ourselves?”

Grace applied her do-it-yourself gumption to helping Indian playwrights write more and better Indian-centered narratives. In 2018, after sourcing for her own funding, she organised a workshop for 16 Indian theatre-makers and writers with noted playwright Alfian Sa’at. The workshop exposed them to the works of Indian playwrights from Singapore and the region. But that wasn’t enough for Grace.

“I didn’t want [the workshop] to finish and have nothing happen,” she shares. “So I proposed that we start a group where whoever’s interested can meet on a regular basis, write a script, come, and read. And then we help each other to develop a full-fledged script.” Brown Voices aims to create five full-length scripts by the end of the year.

But first, the collective will be getting their feet wet by presenting short plays at Centre 42’s annual showcase of new writing and emerging theatre-makers, Late-Night Texting, this coming August. With Indian-centred narratives set in the domestic realm, the collective is calling their programme Kitchen Masala. 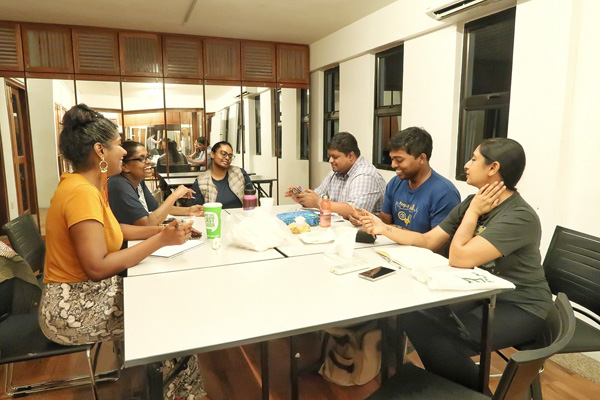 A Brown Voices meeting at Centre 42. (Not all members present.)

Late-Night Texting was also when MTG went from “tuition group” to making public presentations. In 2017, in a show called ETA: 9MIN, MTG playwrights debuted nine nine-minute bilingual plays – one from each member – for the Late-Night Texting audience, filling our Black Box to the brim set after set.

“With ETA: 9MIN, we didn’t realise there’d be so many people who’d want to watch the show,” Nabilah recalled. “And it wasn’t our usual audience – when you think about Malay theatre, you think about Malay and Malay-speaking audiences. And it was very much an English-speaking audience.” MTG returned to Late-Night Texting the following year with a brand new set of short plays which, too, played to full houses over two nights.

Nabilah recognises that ETA: 9MIN was a breakthrough, not just for Main Tulis Group, but for Malay theatre in Singapore as well. She says, “It was an opportunity to showcase what work from a Malay playwright might be like, and they may or may not touch on issues relating to race, but they can talk about a lot of other things like sexuality, politics, social issues – which they did.

“It helped nuance the idea of the Malay playwright.”

Even though she set up MTG, Nabilah doesn’t like to call herself the collective’s leader: “I pretty much always do everything in consultation with everyone. And the administration can be a lot of work.” She shares responsibility of the group’s email and social media accounts with two other members, Nessa Anwar and Farhanah Diyanah. Meetings are organised, news relayed and collective decisions made via a WhatsApp group chat.

This diffused leadership and decision-making has enabled MTG to continue operating over the last three years, even when members started heading overseas for further studies. Currently, two of the nine members are not in Singapore for an extended period. Nabilah herself spent 2018 in the UK studying for a Master’s degree in writing for performance at Goldsmiths.

“[MTG] shouldn’t fall apart in the year I’m away,” Nabilah says. “I would’ve failed if that happened. It should still work even when I’m not in it.”

“So I just said [to the workshop participants], I’m going to be at the kopitiam from this time to this time. If you’re interested in having this kickstarted, join me. And five of them came!”

The kopitiam meeting was where the collective first discussed how they would operate and what their expectations and goals were. Grace explains, “Brown Voices may be my idea, but I also wanted it to be what they wanted.” Each meeting is now arranged and chaired by a different member.

I ask Grace what is on the horizon for Brown Voices, and she says, “There is our first outing at Late-Night Texting, and then – play readings? Perhaps at Centre 42. And I did propose to the group that we write [a script] together via Google Docs.”

Since gaining recognition at their first Late-Night Texting outing in 2017, MTG has gone on to hold public readings, lead playwriting workshops, and even advise school drama groups. Most recently, the collective has ventured into collaborative writing, with three members, Hazwan Norly, Raimi Safari and Nabilah co-creating Pitch Witch, a performance at #BuySingLit 2019 which responds to Edwin Thumboo’s poem Ulysses by the Merlion. MTG will also be showcasing more new writing based on Southeast Asian poetry at Late-Night Texting this year in Verso/Recto.

Despite MTG’s achievements, Nabilah is cautiously optimistic about the future of the collective. She reveals that their meetings have been much less regular than before, and has even broached the subject of closing down the group: “If MTG is not useful anymore, then I said we can stop. If we’ve all moved on and we don’t want to work in this way anymore, then it doesn’t make sense to keep it for sentimentality’s sake. [A]pparently some members were sad when I said that… But [MTG] can evolve, so that it continues being relevant and useful to us.”

MTG’s record over the past three years is hope for newer collectives like Brown Voices, that a ground-up group can be productive, sustainable and impactful. There is, indeed, strength in numbers.

“If you asked me in 2016 if I could imagine MTG like this now, I would have said no,” Nabilah says, breaking into a big smile. “It feels like the power balance is shifting. It’s like we all have the power to start things, without having to wait for opportunities.”