The House at 42 Waterloo Street 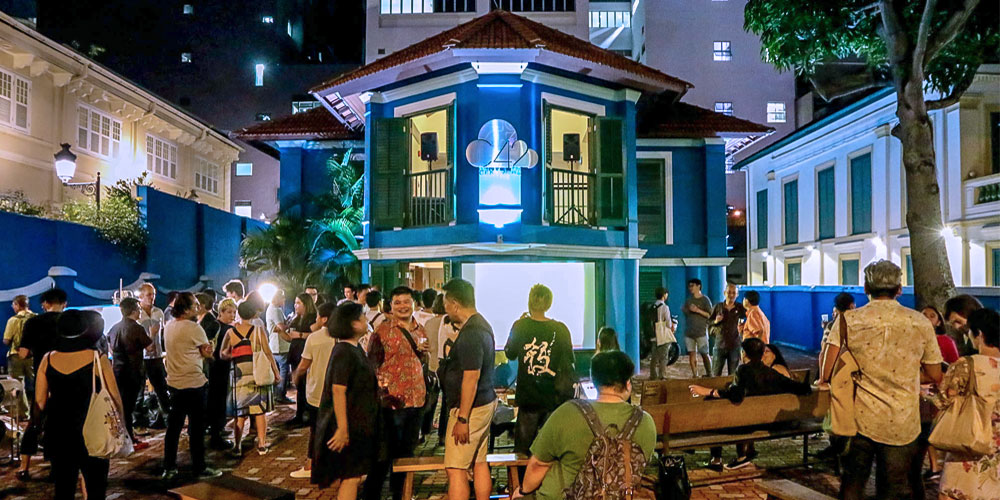 Reception in the Front Courtyard at “In the Living Room: William Teo’s Asia-in-Theatre Research Circus” in 2017.

Reception in the Front Courtyard at “In the Living Room: William Teo’s Asia-in-Theatre Research Circus” in 2017.

Centre 42’s home at 42 Waterloo Street is really old. But just how old exactly? We’re not entirely sure. What we do know is that the house must have seen a lot in its lifetime, evolving from a home for families, to a commercial space, and in recent years, back to being a home – for the arts. 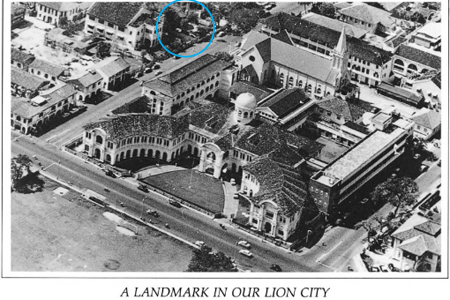 Records are sketchy as to when the house at 42 Waterloo Street was first built. Doraikannu Jawharilal, who used to be a resident at 42 Waterloo Street, told the New Paper that the house was built in the early 1930s, dating the age of the structure at 80 years. But it could be much, much older. According to the National Heritage Board website Roots.sg, the bungalow could have been built over 127 years ago!

The book Singapore Eurasians: Memories of Hopes refers to Waterloo Street and its neighbouring streets as “the foremost Eurasian enclave” at the turn of the 20th century. The bungalows in the area were described as “large compounds with massive trees and stone pillars at the entrance to the compound”, which sounds very much like 42 Waterloo Street.

In the early 1900s, the house was the home of the de Souza family. At some point in history, likely around the 1930s, the rooms in the bungalow were let out to multiple tenants. Doraikannu said the house had been divided into “about 20 rooms but only one kitchen and one toilet which all the tenants used to share.” He estimates that 50 tenants lived at 42 Waterloo Street in the 1960s.

On 22 Sep 1969, the property was sold in a public auction and converted into a commercial space. 42 Waterloo Street then became the operating address for the Dharmapala P. Company, which offered “engraving on all types of metals, cups & trophies by hand”. The company appears to have folded in 1977 following a notice for the sale of its equipment.

From that point, it looks like 42 Waterloo Street sat unoccupied for almost two decades. 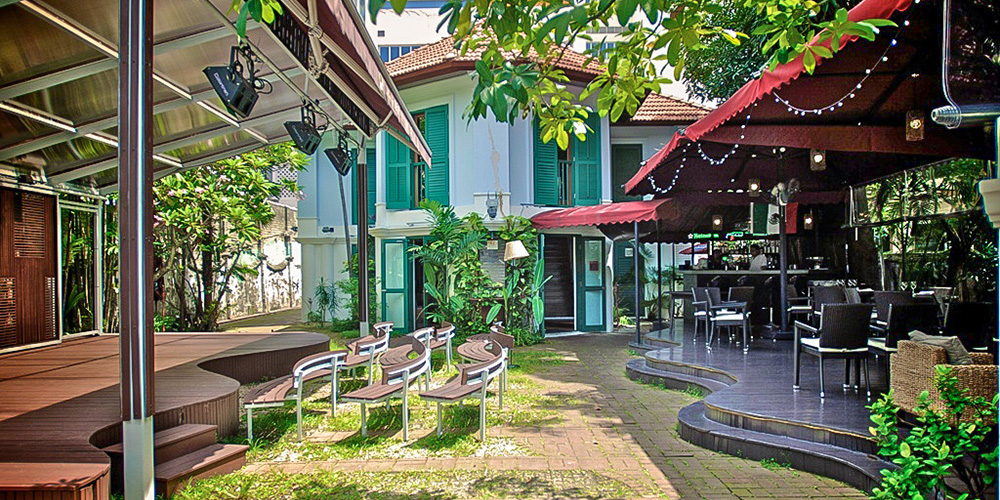 42 Waterloo Street, circa 2012, home to local theatre company Action Theatre. On the left is an outdoor performing area called The Stage Under The Mango Tree. On the right is the alfresco seating of Mexican restaurant Casa Latina. Photo: Casa Latina

– A home for Action Theatre

In 1995, the National Arts Council (NAC) put up 42 Waterloo Street for leasing as part of its Arts Housing Scheme. NAC’s goal was to turn Waterloo Street into an arts district, and by that year, several arts groups were already residing in the other historic properties in the area. 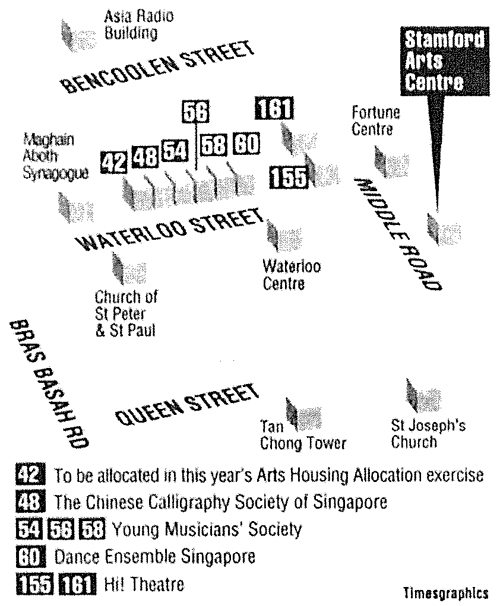 Graphic of the arts tenants of Waterloo Street. Source: The Straits Times, 3 Mar 1995

In 1996, NAC announced that 42 Waterloo Street had been allocated to Action Theatre. Action Theatre was formed in 1987 from a group of National University of Singapore graduates who wanted to pursue theatre-making in their spare time. Action Theatre registered as a society in 1988 and turned professional in the 1990s. Action Theatre primarily staged new plays from local playwrights like Ovidia Yu, Eleanor Wong and Desmond Sim.

Action Theatre’s artistic director Ekachai Uekrongtham had plans for the house – in the words of the project’s architect Vincent Lee, Ekachai wanted “a cross between Jim Thompson’s house in Bangkok – a landscaped setting in the middle of the city – and experimental, fringe theatres like Nimrod in Sydney”. Action Theatre’s new home was intended for theatre practitioners to experiment and develop new work.

From October 1998, the rundown property at 42 Waterloo Street underwent six months of extensive restoration and refurbishment. The second floor of the bungalow was gutted to create a small theatre with seating for 100. The ground floor would house the box office and a restaurant. Behind the bungalow, a new L-shaped extension was built for rehearsal spaces on the ground floor and Action Theatre’s offices on the second. There were also two outdoor stages on the compound, one in the front courtyard, the other nestled in the crook of the extension. Lush landscaping would further bring Ekachai’s “tropical theatre resort” vision to life. Renovation costs amounted to S$1.3 million, with NAC footing half and Action Theatre raising the remaining amount on their own. 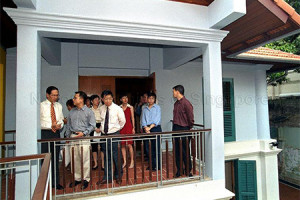 On 28 May 1999, then-President Ong Teng Cheong came to tour the premises. On 12 November 1999, 42 Waterloo Street was officially declared open by Professor Tommy Koh, who had been NAC Chairman when Action Theatre was allocated the property.

For over a decade, Action Theatre at 42 Waterloo Street would be instrumental in developing local playwriting. Said Ekachai in 2001, “We’ve been continuously working towards realising our goal of turning [42 Waterloo Street] into a ‘greenhouse’ for incubating new works and new talents for Singapore theatre.”

To that end, Action Theatre ran a range of initiatives at 42 Waterloo Street, from a ten-minute playwriting competition to new works showcases like the 42 Theatre Festival. The intimately-sized theatre, known as The Room Upstairs, also saw the debuts of many loved and landmark works in Singapore theatre, such as Desmond Sim’s Autumn Tomyam and Alfian Sa’at’s The Optic Trilogy in 2001, and Jean Tay’s Everything but the Brain in 2005.

Action Theatre moved out of 42 Waterloo Street in 2012 and soon after ceased operations.

Actor Serene Chen performing a reading of a local play during the soft-launch event of Centre 42 on 21 April 2014.

In 2013, NAC announced intentions to refurbish 42 Waterloo Street and create a centre for the development of text-based works. It sought proposals from partners interested in developing and operating such a centre.

A collective called TAFY (Two-And-Fifty-Years) – comprising industry veterans Casey Lim, Michele Lim, Robin Loon and Chiu Chien Seen – submitted a proposal for a centre that would not only help to create new Singaporean works, but also document and promote Singapore theatre. This was Centre 42, named for its location at 42 Waterloo Street, and also in homage to Centre 65, an arts centre started by pioneering Singaporean playwright Goh Poh Seng in 1965 to promote arts and culture in the newly-independent nation.

With a lick of bright blue paint, 42 Waterloo Street received its latest tenant in early 2014. On 7 July 2014, graced by then-Minister for Culture, Community and Youth Lawrence Wong, the blue house officially opened its doors to artists and audiences.

Centre 42 swiftly got to work, and within a couple years had launched a slew of programmes serving the Singapore theatre industry and public, which include incubation of new plays, archival of local theatre ephemera, and promotion of local theatre history, to name a few. Our showcase of new works and emerging theatre talents, Late-Night Texting, has also become a fixture on our yearly calendar since 2016. Held in conjunction with Singapore Night Festival, we’re able to introduce thousands of audience members to Singapore theatre each night. 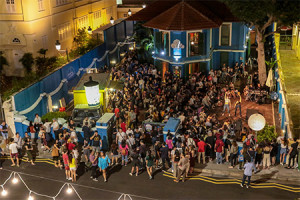 The throngs of audience at Late-Night Texting 2019.

Over the years, the blue house has become a birthplace of new theatrical works and new theatre-making groups. But more importantly, it has evolved into a community hub for theatre-makers and theatre enthusiasts, who regularly congregate within our blue walls, drawn together by their love for the stage. And with changes in the works for 2020 and beyond, the history of 42 Waterloo Street looks set for a new chapter.

Read the other articles in this series about the blue house on 42 Waterloo Street.